Everything done outdoors! Experiences, ideas, tips, and places to go! Hiking and geocaching; backpacking and camping; cold-weather and snow camping, too!

Wondering how many of the folks here are affiliated with troops who have members (youth and/or adults) who have undertaken to train and certify in the Wilderness First Aid (WFA) that National is promoting as a requirement for any backcountry trips?

How did you go about it, what was your course like, and have you benefited from it? Is there anything you would add or delete?

I took the course three years ago. It was my first time taking the course and taught many great lessons about how to deal with emergencies when help will be delayed.

The only bad part was the amount of time (two full days) and the cost.

My only other negative comment is that, like many Red Cross trainings, the training expires quickly. Every two years. Plus I think the training will be much much less valuable after the 1st time. I'd rather see the course required every five to ten years with an on-line refresher and test renewing it every two years. Life is very busy and the training requirements are beginning to stack up. I'm already on my fifth or sixth time for CPR and third or fourth for first aid. It's frustrating to sit through a course the 2nd, 3rd, 4th, 5th or more time.

It is required for Philmont & Sea base. It has to do with American Camp School accreditation among other reasons. I am pretty sure my Red Cross card says three years. Solo & others are typically two years. I have done the Red Cross one twice. I was less happy with it the second time. It seems to be drifting towards call 911 & don't do anything. I will probably take one of the others next time to get a different perspective.

Since the standard first aide courses are pretty much call 911 & don't do anything. (A good idea when that option is available.) The RC WFA is mostly about site management. I would see an additional course that adds back what has been lost in the traditional first aide courses.
Frank J.
Venturing Crew Adviser, Assistant Scout Master, Renegade Merit Badge Counselor
Owl-2 WB 92-49
Foothills District Atlanta Area Council
I never teach my pupils. I only attempt to provide the conditions in which they can learn.--Albert Einstein

FrankJ wrote:Since the standard first aide courses are pretty much call 911 & don't do anything. (A good idea when that option is available.) The RC WFA is mostly about site management. I would see an additional course that adds back what has been lost in the traditional first aide courses.

You described it exactly right. Site mgmt leaning toward call 911 and don't do anything. Less "first aid" than I thought. More about practice emergencies, dealing with reality and making decisions.

I took WFA for a Sea Base trip, an absolutely a great experience by the way!

I took the course about 8 months ago, needed it so I could go to Philmont.
If you don't take care of the Cub Scouts there will be no Boy Scouts!
Owl Patrol NE-IV-214

In terms of first aide, not that much is really new. The RC WFA is more about site management and stabilization. The assumption is that you already have first aide skills. I would expect that whatever you taught in the military is way more advanced.
Frank J.
Venturing Crew Adviser, Assistant Scout Master, Renegade Merit Badge Counselor
Owl-2 WB 92-49
Foothills District Atlanta Area Council
I never teach my pupils. I only attempt to provide the conditions in which they can learn.--Albert Einstein

I just did it about a month ago and while it was good, having it in an outdoors setting would have been better.
It hit on general first aid and how to use resources around you, when to stay, when to go, how to go.
Bill

Took it last Spring and will take it again sometime in the next few months in preparation for our 2012 trip to Philmont.

I thought it was a good class (very good instructor) and learned a few things I did not know.
Mike
* Crew Advisor, Crew 2598 Longhorn Council
* Eagle Scout - 1982

Glad to hear of the positive experiences. Like any course it is going to depend on the instructor. It can meet the requirements without actually imparting any real knowledge and/or being interesting.

My troop is holding a course next week-end (13-15) for 6-7 boys and 3-4 adults. We have no specific high adventure goal in mind but happened to find a qualified instructor locally - a new park ranger who moved to the area from Iowa who is RC certified to teach the course. So we'll have trained youth and adults should we decide upon a high adventure trip sometime over the next couple of years.

I'm not qualified by certification to teach but am by experience and training, so I'll be assisting. A boy who is otherwise too young has been enlisted to function as a "patient" so that his dad will take the course with us. That will give him - the Scout - some training if not the certification this time around, a couple more nights of camping for rank advancement and some material to brag about to the other younger boys so they have something to look forward to when they get to be 14.

Our training will take place at Camp Levi Levi, atop Hualapai Mountain by Kingman, AZ, at an altitude of about 7,200'. We are of course using the RC materials, and the sly ol' Scoutmaster has a few tricks to toss into the bag as well.

I took WFA 6 years ago. I agree it was more about site management and judgement - but to me most people will benefit from having to think through scenarios that they may never have considered. Emphasis was placed on regular first aid (now!) relies on advanced medical support within 15 - 20 minutes (i.e. call 911). When I took WFA the empasis was on you being to far for 911 to help. If that has changed the it becomse much less useful.

Cost is an issue for sure. When a took it, with a Boy Scout leader who is also certified to teach many of the Red Cross courses we paid $35. More recently I have seen it offered for $75 and $100. Way to much in my opinion.

Also I agree about the frequency of expiration. Perhaps there is research to back that up, but I don't agree with it.

WVBeaver05 wrote:Cost is an issue for sure. When a took it, with a Boy Scout leader who is also certified to teach many of the Red Cross courses we paid $35. More recently I have seen it offered for $75 and $100. Way to much in my opinion.

I don't know if it varies by area, but the cost here in NCAC varies from $140-185. Very pricey in my opinion and something they need to consider if they want youth to take the course as well.
1st ASM, 2010 NCAC Jambo Troop 521
WB NE-IV-216 Eagle, Beaded 17 June 2010
Unit Commissioner, Goose Creek District

I took this in April here for $107. Although that may seem pricey, it did included meals and two nights in a BSA cabin. My other choice was a SOLO class in Columbus OH for $175 that only included lunch for the two days.
Mother of two Eagles and troop Advancement Chair

My class this last weekend cost me $155. It was only classroom, no meals, no lodging, they asked attendees to bring snacks. Great class and instructors, but very low-budget on the infrastructure side. Not going to get youth to attend at those prices.
1st ASM, 2010 NCAC Jambo Troop 521
WB NE-IV-216 Eagle, Beaded 17 June 2010
Unit Commissioner, Goose Creek District

I promised an account of how the course went for us and finally have time to put my thoughts into some sort of cogent writing.

The course as presented was less than expected. The instructor had planned (?) to do more hands on than what we were able to fit into the time frame. I believe that as this was his first time actually teaching this course that he might have been a bit overwhelmed by the amount of material to be covered and the time allowed. He relied heavily upon reading directly from the course material itself, though we did do several rotations using a backboard, cravats, dressings and other items. The plans to make use of moulage and to offer in sacrifice t-shirts and shorts to the trauma shears went to the way side.

The boys themselves got a bit of a shock when I demonstrated the effects of altitude - 7,200 feet at our event location - via the use of a pulse oximeter, which showed that even a healthy young boy of 14 who has never smoked a day in his life or is otherwise affected by asthma, etc, returns a value of only 94-95% oxygen saturation while sitting down vs. the 100% saturation that they would normally enjoy at lower altitudes. The adults present who were smokers could equal that value owing to their higher induced hemoglobin levels (more red blood cells to carry the oxygen). Prior to that little demonstration they didn't think they were affected by the altitude. 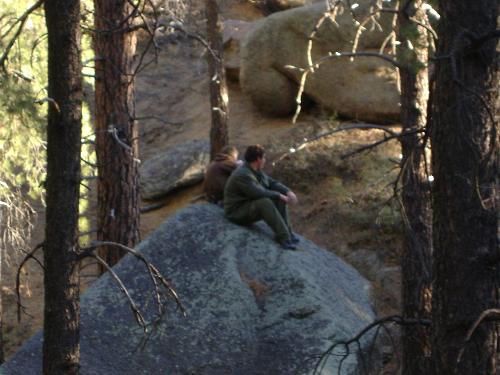 The picture was taken during our Spring Camporee, held on the same mountain but about 1,000' lower in elevation. Our course was held in the same terrain, using a hillside and a small open area as our classroom. Unfortunately, owing to time constraints, we weren't able to take advantage of a small cave to practice a rescue scenario as we had hoped to.

For kids this course was a big step above the regular FA merit badge. For the adults, two of whom were trained as Combat Lifesavers in the Army, it offered little new material but made for a welcome refresher.

Ideally any troop undertaking this course would follow it up with more hands-on practice. That is something we have tentatively planned for the future, when the younger Scouts can also partake in the fun. Our county has an active SAR team that is called out frequently to locate lost persons or to effect rescues over roadside cliffs or in the desert itself.

If we, as some here have mentioned they had to, were called to pay $100 or more for this course we would have approached it with far more hesitation. As it was the Troop covered the cost of food and transportation, and the participants themselves had to fork over $35 each for program materials (RC manual and training kit), RC certification cards and AHA CPR certification. For us, however, being able to meet the requirements for having appropriately trained members along for any future backcountry trips is worth the expense.

Hey, you held class 200' higher in elevation than my house, and about 300' lower than our troop meeting place.

Users browsing this forum: No registered users and 0 guests